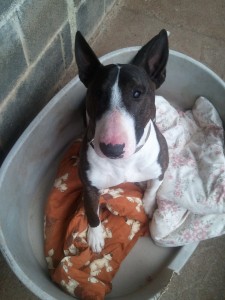 Six weeks ago we took in Cushdie, an English Bull Terrier without a future. He was five years old and without some help wasnt looking like getting much older. Cush had been through a difficult time with lots of worrying changes in his life. He was insecure and unsure of humans. I am really happy to say that Cushdie changed his view on humans, responded to the routine, exercise and reliable interaction we were able to give him at the centre and has just gone to his new home. He lives with another dog, several cats and two adoring owners who could not have been more delighted with him. Not every situation has a happy ending – but its fantastic when they do.

1 thought on “Good News For Cushdie”